Well, here we are again, facing down the barrel of another Federal Budget, which has predictably targeted superannuation, seeking to prevent it being a  vehicle for taxation minimisation for the “wealthy”. Some might say that this is a moral victory for the Government, to prove prior to election time, that  it is seeking to even the playing field when it comes to superannuation tax concessions.

We are not surprised that this was the approach as it makes sense in an election year. It is a much more popular stance to make than say, addressing  negative gearing…

It is important to note, before I get into the nitty-gritty of the announcements and their potential impact, that these are just that, “announcements”. An election is slated for July 2, and whomever the ruling Government is, following this election will need to pass the measures through parliament.

The most concerning part of some of these announcements, is the impact on superannuation accounts, and contributions that have been made to these accounts. But more of this to come…

2. It might be worth reviewing your salary sacrifice arrangements and personal deductible super contributions, and make sure that you will not exceed the new reduced cap. In many cases your superannuation guarantee (SG) might take up the majority of your concessional cap.

3. You might need to contribute smaller amounts over a longer time frame to comply.

You will be able to “catch-up” un-utilised concessional contributions if you have less than $500,000 in your super

Unused concessional contribution cap amounts will be able to be carried forward on a rolling basis over 5 consecutive years. This applies to unused cap amounts from 1 July 2017.

This is designed to assist people you have had a break from the workforce, such as working mothers, previously unemployed etc. It does however apply to everyone who has contributed less than the cap.

It is however unclear exactly how the $500,000 will be calculated and whether it will include previous withdrawals.

A lifetime non-concessional contributions cap of $500,000 will be introduced effective Budget night.

This cap will be indexed in $50,000 increments in line with AWOTE (Average Weekly Ordinary Time Earnings).

This cap replaces the previous non-concessional contributions cap of up to $180,000 per year (or $540,000 every 3 years under the bring forward rule for those under 65).

If you have previously used the “bring forward” provision you will need to check if you have already reached this cap. Contact us if you would like to determine your position regarding this.

The introduction of a $1.6 million superannuation balance cap effective 1 July 2017, but there is no grandfathering…

This is will potentially have a significant impact on many of our clients, in particular those seeking to downsize their homes in the future and contribute to super.  The impact will not just be felt post 1 July 2017, as those with superannuation balances in pension phase in excess of $1.6 million at 1 July 2017, will need to take action to remove excess funds from pension phase.

Where you accumulate more than $1.6 million, you will have to maintain this excess in accumulation phase (where earnings will be taxed at the concessional rate of 15%).

The cap will be indexed in $100,000 increments in line with CPI (Consumer Price Index). A proportionate method will be applied to measure the % of cap previously utilised.

If you are a couple you will be able to have a combined superannuation pension balance of up to $3.2 million. However where you have superannuation savings in one spouse’s name the $500,000 lifetime concessional cap will restrict your ability to equalise your benefits to take full advantage of the transfer balance cap.

You have an existing pension balance

1. Transfer the excess back to an accumulation; or

2. Withdraw the excess amount from your superannuation and invest outside the super environment

You might be impacted when disposing assets prior to transferring back to accumulation so as to ensure any capital gains are crystallised while the assets are still in pension phase and exempt.

What if you breach the cap?

Think that there is no way that your income would exceed $250,00? It is important to consider taxable capital gains and employer termination payments. You will not receive a Division 293 notice from the ATO until up to 18 months after making the concessional contribution, and it could be a rude shock!

This proposal might also increase the cost of funding insurance in superannuation using concessional contributions if you are earning in excess of $250,000.

Currently income earnt on assets in TTR pensions is exempt from tax. From 1 July 2017, earnings will be taxed at 15%.

The taxation of earnings will only apply when you have reached preservation age but not yet retired.

If you have a TTR pension or commence one prior to 1 July 2017, this measure will not be grandfathered. The earnings in your TTR will be taxed at a rate of 15%. This will significantly reduce the tax effectiveness of TTRs and salary sacrifice arrangements. However if you are over 60 TTR strategies might still be of benefit as pension payments are tax free and allow tax effective salary sacrifice contributions. However if you are under age 60, TTR might not be a beneficial strategy post 1 July 2017.

In addition, you will not longer be able to treat certain superannuation income stream payments as lump sums for tax purposes, which currently makes them tax-free up to the low rate cap of $195,000.

It might “force” you to decide to retire earlier than originally intended in order to meet the conditions of release. We would encourage you to contact us to do the analysis as to whether this is a beneficial way forward, based on your personal circumstances, current income levels and superannuation savings.

The income threshold for the spouse superannuation tax offset is increasing from $10,800 to $37,000. A contributing spouse will be eligible for an 18%offset worth up to $540 for contributions made to an eligible spouse’s superannuation account.

You do not have to be self employed, or even employed to receive a tax deduction on personal contributions to superannuation anymore

Effective 1 July 2017, all Australians under 75 can claim an income tax deduction for any personal superannuation contribution made to a complying super fund up to your concessional cap.

To access the deduction you will need to lodge a notice of intention to claim the deduction with your super fund prior to lodging your tax return.

Below is an interesting infographic from the Financial Planning Association (FPA) which summarises the super reforms: 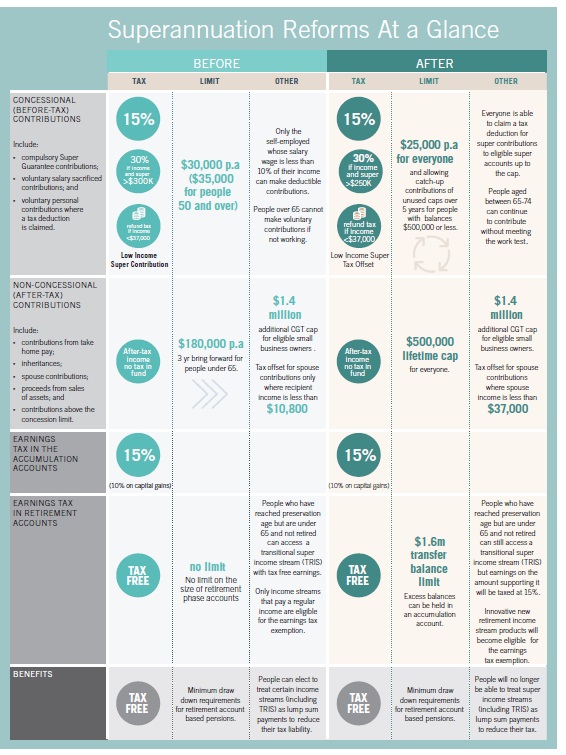 Effective 1 July 2018, the Government will continue the pause on indexation of the income thresholds for the Medicare Levy Surcharge and Private Health Insurance Rebate for a further three years.